Tibetan Buddhist monks from Drepung Loseling Monastery will construct a mandala sand painting and perform special ceremonies August 18-21 in Asia Society Texas Center’s Louisa Stude Sarofim Gallery. During this ritual, millions of grains of sand are painstakingly laid into place in order to purify and heal the environment and its inhabitants. 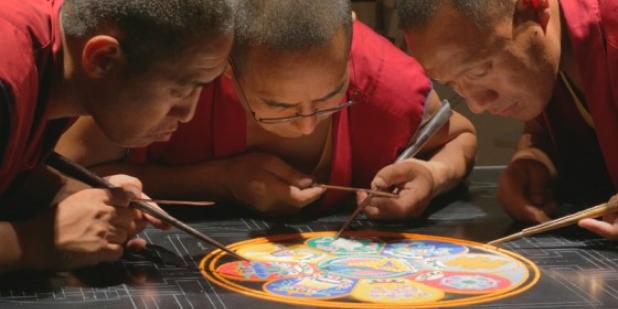 Tibetan Buddhist monks from Drepung Loseling Monastery will construct a mandala sand painting and perform special ceremonies August 18-21 in Asia Society Texas Center’s Louisa Stude Sarofim Gallery. During this ritual, millions of grains of sand are painstakingly laid into place in order to purify and heal the environment and its inhabitants.

Opening Ceremony | Thursday, August 18, 12 pm | FREE Admission
The mandala sand painting begins with an opening ceremony, during which the lamas consecrate the site and call forth the forces of goodness through chanting, music, and mantra recitation. The lamas then begin the painting by drawing an outline of the mandala on a wooden platform. In the following days, they lay the colored sands using a traditional metal funnel called a chakpur.

Closing Ceremony | Sunday, August 21, 3 pm | FREE Admission
The monks will dismantle the mandala, sweeping up the colored sands to symbolize the impermanence of life. Half of the sands will be distributed to the audience at the closing ceremony, while supplies last, and the remainder will be deposited into a natural body of water.

This artistic tradition of Tantric Buddhism, painting with colored sand, ranks as one of the most unique and exquisite. Millions of grains of sand are painstakingly laid into place on a flat platform over a period of days or weeks to form the image of a mandala. To date, the monks from Drepung Loseling Monastery have created mandala sand paintings in more than 100 museums, art centers, and colleges and universities in the United States and Europe.

Mandala is a Sanskrit word meaning sacred cosmogram. These cosmograms can be created in various media, such as watercolor on canvas, wood carvings, and so forth. However, the most spectacular and enduringly popular are those made from colored sand.

In general, all mandalas have outer, inner, and secret meanings. On the outer level they represent the world in its divine form; on the inner level they represent a map by which the ordinary human mind is transformed into enlightened mind; and on the secret level they depict the primordially perfect balance of the subtle energies of the body and the clear-light dimension of the mind. The creation of a sand painting is said to effect purification and healing on these three levels.

Cost:
Gallery times differ each day. Please see the "Gallery Hours" and "Special Events" sections for more information. The exhibition and its related events (with the exception of Saturday's ticketed performance) are free and open to the public.
Event Website URL:
http://asiasociety.org/texas/events/mystical-arts-tibet-featuring-tibetan-monks-…
Phone Number:
713.496.9901