The USC US-China Institute presents a talk and Q&A session with Lynne Joiner on her new book. 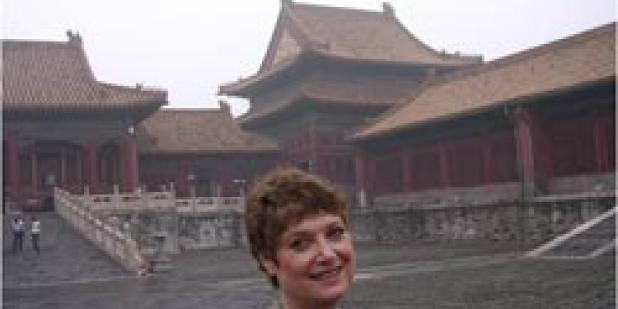 Honorable Survivor weaves John S. Service’s extraordinary story into the fabric of a watershed moment in our history when World War II was ending, the Cold War was dawning, and the McCarthy era was beginning. A true tale of intrigue, adventure, persecution, and redemption—and of the love of a loyal American wife and a Chinese lover—this biography of Jack Service tells the story of an idealistic U.S. Foreign Service officer in wartime China who early on predicted Mao Zedong’s successful revolution. His prescient reports went unheeded by U.S. policy makers, and later he became Senator Joseph McCarthy’s first victim. The author describes Service’s long fight to the U.S. Supreme Court, which ordered him reinstated, and reveals how his renewed career was derailed by anti-communist crusaders, the China lobby, the FBI, and Chiang Kai-shek’s secret police.

Born and raised in China by YMCA missionaries, Service became America’s key liaison with the Communist Chinese when General Joseph Stilwell wanted their help against the Japanese. Later, he became a target of revenge for the Nationalist Chinese, a convenient scapegoat for American politicians eager to advance their careers, and a “person of interest” to J. Edgar Hoover for more than a quarter century. Joiner was given special access to Service’s private papers and photographs and gained access to FBI, CIA, and State Department security records and to confidential transcripts of congressional hearings and federal loyalty review boards. Although newly released Soviet and U.S. documents demonstrate that some of his wartime associates were in fact identified as communist spies or fellow travelers, Joiner shows that Jack Service was an honorable survivor innocent of Senator McCarthy’s charges.

Why this book is timely and relevant:

In 1973, John Service made remarks which resonate today as America faces challenges in Afghanistan, Pakistan, Iraq and Iran:

There are still countries—in Latin America, Africa, and parts of Asia—where the situation is not unlike that in China during the 1940s.  If we keep ourselves in ignorance and out of touch with new popular movements and potentially revolutionary situations, we may find ourselves again missing the boat. . . .
The measure of the need for such reporting is not popular sentiment in the United States as reflected in some segments of the press, or by some Congressional committees not charged with foreign relations. . . . The legacy of Senator Joe McCarty still needs, in some respects, to be shed.
—John S. Service remarks at U.S. State Department luncheon honoring the old China hands, January 23, 1973

“Sometimes a writer can use one person's story to illuminate an entire piece of history, and that is what Lynne Joiner does in her engrossing and readable book. . . . This is both a solid addition to scholarship of the Cold War era and the moving, very personal story of the life of one man: brilliant, flawed, long suffering, and honorable indeed.”
—Adam Hochschild, author of King Leopold’s Ghost: A Story of Greed, Terror, and Heroism in Colonial Africa

"Joiner ably tells the tragic story of a good American laid low by the basest kind of character assassination masquerading as anti-Communism. All one can say is: 'Read this book and weep!' "
—Orville Schell, Director of the Center for US-China Relations, Asia Society.

"This maelstrom of political intrigue, with Service at the center, is presented in well-documented and engaging detail. It is critical reading for anyone concerned with China policy and an instance of Congress and the FBI subverting justice.”
—Richard H. Solomon, former Assistant Secretary of State for East Asian and Pacific Relations; currently President of the U.S. Institute of Peace

“Honorable Survivor is the gripping tale of one man’s extraordinary life in wartime China and the Kafkaesque era of McCarthyism in America. Lynne Joiner does a masterful job of using new materials to illuminate how personal decisions, great historical forces, and the actions of vindictive and overzealous officials shaped developments in China, the United States, and U.S.–China relations in ways that have yet to be fully resolved.”
—Thomas Fingar, former U.S. Deputy Director of National Intelligence for Analysis; currently lecturer at Stanford University

“Jack Service did not lose China.  On the contrary, he was a hero of the times. . . . This well-written and thoroughly researched book . . . helps us understand the machinations and failures of U.S.–China policy, on both the American and Chinese sides.”
—Victor Hao Li, former President, East-West Center, Honolulu, and former Shelton Professor of International Law, Stanford Law School