Exhibition: Treasures from Shanghai: 5000 Years of Chinese Art and Culture 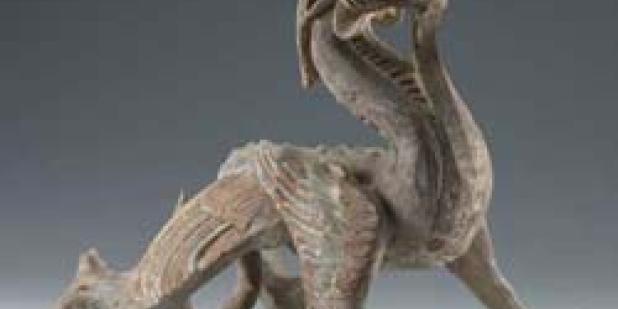 The exhibition is part of the grand opening of the new Dorothy and Donald Kennedy Wing of Bowers Museum and promises to be one of the most important yet to come from the Shanghai Museum after its reopening. “Treasures from Shanghai” premieres in California at Bowers Museum on an auspicious date: Chinese New Year, Feb. 18, 2007, the year of the Pig (a sign of wealth and affluence). It will remain through Aug. 19, 2007.

“Treasures from Shanghai: 5000 Years of Chinese Art and Culture” has been curated by Chen Kelun, well respected authority of Chinese history and culture and deputy director of the Shanghai Museum.

Selected objects include examples of Neolithic pottery jars and jade ornaments, bronze and ancient oracle bones from the Shang and Zhou dynasties, porcelains and other ceramics from the Tang through Ming dynasties, to a myriad of some of Shanghai Museum’s most exquisite and historically relevant lacquer boxes, paintings and calligraphy in Ming and Qing dynasties.

The focus of this dynamic exhibit is the ancient Chinese bronzes, from late Xia to early Han dynasty, and the exquisite Chinese porcelains from the Song dynasty to the prime time of the Qing dynasty. This exhibit displays nearly 20 pieces of ancient bronze vessels, cookware and music instruments, which demonstrate the ancient Chinese court dining cultures and rules of ceremonies. The porcelain works illustrate the most delicate and tasteful Chinese ceramic craftsmanship, including Yue ware, Xing ware, Cizhou ware, Jun ware, Longquan ware, and Jingdezhen ware.

The Shanghai Museum is one of the truly great museums of our time. Its spectacular architecture and world-class exhibits make it the cultural centerpiece of modern Shanghai. Most importantly, however, its collection represents some of the finest examples of China’s rich heritage found anywhere. With over 120,000 artifacts in its collection, the Shanghai Museum is acclaimed as the biggest and best museum in China. Founded in 1952, the Shanghai Museum has consistently expanded its collections and thus preserved Chinese culture. It is one of the world’s leading repositories of ancient Chinese civilizations. The current museum has 11 galleries, which cover the major categories of Chinese arts, such as ancient bronze, ceramics, paintings, calligraphy, jade carvings, coins, Ming and Qing furniture, seals, and minority nationalities art. Its extensive collection, emphasizing the artistry and utility of Chinese relics, provides a comprehensive view of Chinese civilization, which has produced some of the most breathtaking works of art since the dawn of mankind.

In similar fashion, “Treasures from Shanghai” draws upon this incredible collection to portray the evolution of Chinese technology, art, and culture.