Professor Jinsheng Han of Peking University will give a lecture on acupuncture. 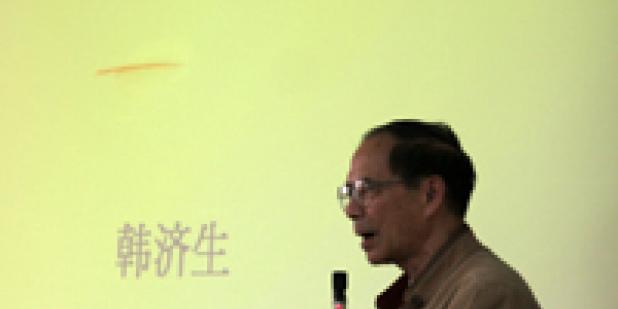 Acupuncture researcher Professor Han Jisheng, is an internationally renowned neuroscientist. His research helped pinpoint the scientific basis of acupuncture in relieving pain. He showed that acupuncture triggers the release of endorphins and other pain-blocking chemicals in the body. Dr Han graduated from the Shanghai Medical College in 1953, and specialized in physiology at the Dalian Medical College. In 1962 he joined the Beijing Medical University as a full Professor of Physiology. He headed the Department of Physiology from 1983 until 1993, when he became the director of the Neuroscience Research Institute and of the Key Laboratory of Neuroscience Research of the Chinese Ministry of Health. Since 1993, he is the member of the Chinese Academy of Science. His major scientific interest have been the neurochemical mechanisms of acupuncture analgesia. He clarified the electroacupuncture-induced frequency-dependent release of neuropeptides in the central nervous system, and the functional balance of opioid and anti-opioid peptides which determines the efficacy of acupuncture analgesia. In recent years, he treats heroin addiction using Han's Acupoint Nerve Stimulator. He has also helped develop pain management as a medical specialty in China.

Click here to view interactive map of the UCLA campus.